Scottish gaffer Scott Napier talks about his experience working on the set of hit series Outlander, some of the challenges he faced, and how Panalux made things easier. 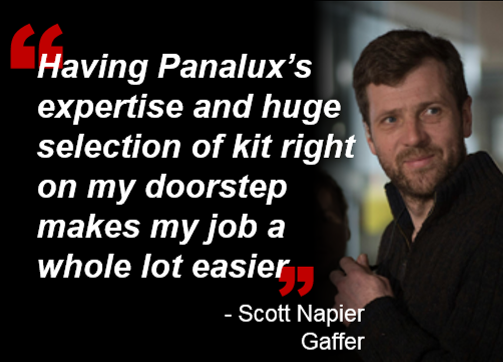 Scottish gaffer Scott Napier has had the good fortune of working on Starz/Sony TV Drama Outlander right from the very beginning through season two, which wrapped up at the start of the year. Although filming jumped from South England to Prague, the large majority took place just a stone’s throw away from Scott’s hometown of Duns in Berwick!

Shot across Scotland’s famous highlands, in forests, wilderness and medieval castles, Outlander is a time-traveling adventure set between the 1700s and mid-1900s. Although sometimes a tricky feat, Scott welcomed the challenge of helping capture the vivid imagery for which Outlander has become famous.

"One of the reasons that the show is so popular is because viewers are drawn into the scenes, they have a connection," Scott explains. "We filmed in big exterior locations like forests and castles, and although the final product is strong, it was quite relentless and a challenge for us to achieve what was required."

Well-known within the lighting industry, Scott has “grown up,” so to speak, with Panalux, starting his career in Lee Lighting. A brief stint in maintenance made way for Scott’s transition to Electrician on jobs like, Rebus, Sea of Souls, The Last King of Scotland and Your Highness.  Scott then made the leap to Gaffer in 2006 before going freelance in 2010. Since then, he has built an impressive portfolio of projects that range from commercials to feature films to television dramas and include Penny Dreadful, Doctor Who, Shetland, Citadel and Filth. Along the way, Scott has collaborated with a number of DoPs, providing a complimentary vision for the likes of Steven McNutt, Nigel Willoughby, Neville Kidd, Cinders Forshaw, Danny Cohen and Tony Imi.

Before Outlander started filming in 2013, small BBC dramas and independent movies made up the majority of Scotland’s production work. Since then, Scotland has enjoyed the spotlight as one of the UK’s premier filming destinations. Outlander — supported by Panalux Glasgow — is the country’s biggest-ever production and was even dubbed the “Scottish Game of Thrones.”

After starting off with two sound-proof stages, Outlander production expanded so quickly that another had to be added by the middle of filming season one. On hand from day one, Scott was responsible for assisting in the planning, creation and set up of the studio complex, now boasting an impressive four main stages. At one point, Scott rigged one of the Outlander sets with 50 Highlights overhead and 125 Flobanks.

“Having Panalux’s expertise and huge selection of kit right on my doorstep makes my job a whole lot easier,” Scott says about being able to access the entire Panalux inventory from Glasgow.

Unlike in the studio, remodeling 15th century castles and other historic buildings used on-location was strictly prohibited. Instead, Scott had to cleverly work around mostly solid stone walls by favoring non-heat-producing, battery-powered LED products. Scott and Panalux Glasgow General Manager Audrei Hendry had this in mind when they selected a load of Panalux LED Hilo Softsources, fluorescent Flobanks and NessLED panels, all wireless and all equipped with Panalux's proprietary flicker-free F-Stop technology.

"We knew that power generation would be somewhat tricky considering the settings Scott was going into," says Hendry, who has worked closely with Scott since 2004. "The wireless lights made the Sparks' jobs a lot easier as they didn't need to run cables everywhere."

In total, Panalux supplied 265 tons of equipment between seasons one and two. According to Scott, Panalux was the only lighting company in the UK with the inventory and fleet to service a production of such size and scope.

"When you are in difficult situations, you need to be creative and clever. Access to the right equipment makes these situations a little more bearable. I knew that with Panalux's extensive range of kit, I could make things work regardless of the circumstances my team and I were in."

Panalux has been committed to helping develop Scotland into a major UK shooting destination since they opened. With additional regional offices throughout the UK in Wales and Manchester, Panalux provide a localized service to each market.

I have a good relationship with Audrei," Scott confirms. "She is personable and friendly and a great problem solver. When normal issues arise between the lighting provider, the crew and the production company, she knows exactly how to take care of the situation." 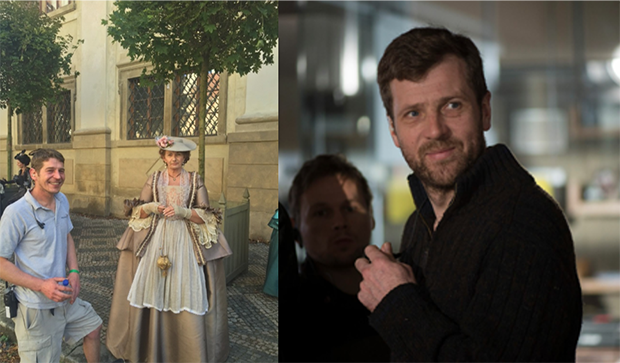