Gaffer Andrew “Tala” Taylor recounts the peculiarities of filming The Bastard Executioner in Wales and how Panalux’s flexible and responsive service enabled him to succeed. 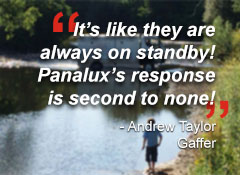 “It’s like they are always on standby! Panalux's response is second to none." Gaffer Andrew "Tala" Taylor has built a solid working relationship with the Panalux family over the past 15 years - a span of time that includes Da Vinci’s Demons, Horrid Henry, The Game, and the latest Tala-Panalux collaboration, FX Network’s 10-part series The Bastard Executioner.

Shot over 16 weeks around the Welsh countryside, The Bastard Executioner crammed together a mega-tight shooting schedule in-studio and on-location that didn’t allow for down time or delays, and pushed requests for lighting delivery to the brink. The project was serviced from the Panalux Manchester office under the close watch of Regional Director, Head of TV and Drama John Lawton and Panalux Manchester General Manager Colin Smart.

"It wasn't uncommon for me to call John in the very late hours of the evening to request kit for the following day," Tala says of the frequent scene and set amendments. "While one location was being shot, the next one was being prepped so production ran as smoothly as possible."

Scene changes became commonplace in part because of unpredictable weather that impacted lighting and rigging set up - a familiar phenomenon for a Welsh Gaffer. "We could be shooting one scene and suddenly in the space of 20 minutes we had four seasons in a single day," explains Tala. "It's no surprise though. That's just the way the weather is in Wales so you just need to roll with it."

For Tala and Panalux, rolling with it meant that new lighting lists were sent over to the Panalux Manchester team during recces for next day delivery, avoiding delays and ensuring that production was still on-track.

"We've been in similar situations like this where very last minute requests have come through, so we knew what to expect," Colin explains. "It just meant that there was a mad rush both in the office and warehouse to get the kit ready and loaded onto the truck to leave on time for the four-hour drive to Cardiff to guarantee that Tala had the kit."

Equipment for The Bastard Executioner took eight truckloads of studio pre-rigging, including a broad range of Tungsten fixtures and an array of distribution and cabling, an assortment of new Arri M-Series lamps – from M800s to M90s and a supplement of Arri-Max 18Ks – in the location package, and a bunch of Fresnels. An 18-tonne truck worth of lighting equipment and an 180kW 4x4 generator truck were used on location in addition to seven and a half tonnes of pre-rigging equipment and 100kW of lights. Panalux’s brand new 80kW 4x4 generator was called to action for the more difficult of the location shoots.

During the course of shooting, Colin put his 25-years of valuable industry experience to good use coordinating complex logistics and the frequent equipment requests, while John liaised with production. Beyond having regular interaction with John and Colin, Tala has worked, at one point over the years, with more or less everyone in the tight-knit Panalux Manchester operations team - from office to warehouse to transportation.

"They all have their roles to play and if one of them is off, another will step in and make sure that the job gets done in the best possible way," says Tala, commending the company on an attention to personal service and a dedication to quality work. "They go the extra mile and I'm always made to feel welcome at Panalux. The boys will go out of their way to help me find what I'm after."

Panalux's personal service extends well beyond productions. Visits to the Panalux Manchester warehouse have resulted in some important hands-on demo time with the latest kit, including Panalux proprietary products - a worthwhile and welcome experience for Tala and other Gaffers. "No Gaffer wants to show up on set and see some kit that they haven't ever seen or heard of before."

Uniquely, Panalux offers Gaffers and other clients the useful opportunity to stop by any of the regional UK offices in London, Manchester, Glasgow and Cardiff to try out, play with and familiarise themselves with kit new and old.

While he has historically had the most amount of contact with Panalux Manchester, Tala applauds the company's recent move to open Panalux Wales, predicting that "'Now that more productions are coming to Wales, it can only benefit production companies knowing that they have the world's largest lighting company on their doorstep. With the help of Panalux and new regional manager Ceiron Jenkins, productions can achieve more with local equipment at local cost." 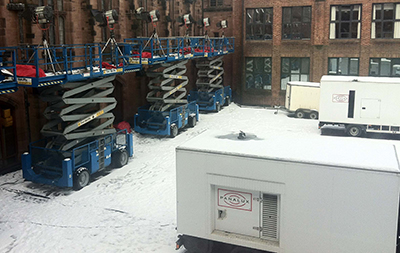 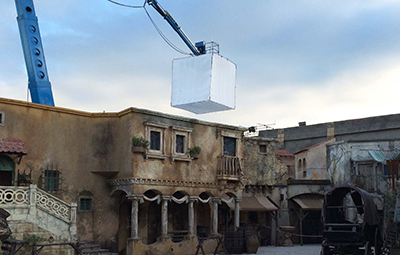