Ari Wegner, ACS recounts her collaboration with director Jane Campion for the Netflix feature The Power of the Dog, serviced by Panavision Auckland with Ultra Panatar large-format anamorphic optics.

Cinematographer Ari Wegner, ACS is no stranger to dramatic filming locations. For the 2013 feature Ruin, she worked in the Cambodian jungle; the remote landscapes of the 2018 drama Stray were captured in New Zealand; and the 2019 biopic True History of the Kelly Gang features several spectacular filming spots around the Australian countryside.

Her most recent project, director Jane Campion’s The Power of the Dog, is no exception. Shot on what Wegner describes as New Zealand’s “devastatingly beautiful” South Island, the feature is set on a cattle ranch in 1920s Montana. It tells the story of two brothers very much set in their ways; when one of them gets married and brings his new wife and son to live on the ranch, it upsets their dynamic and sets the stage for an emotion-filled Western drama.

Since receiving the Silver Lion for Best Director upon its premiere at the 2021 Venice International Film Festival, The Power of the Dog has garnered a bevy of accolades, including Oscar, BAFTA and ASC nominations for Wegner’s cinematography. Wegner recently sat down with Panavision to discuss her approach to the feature, for which she sourced her camera and lens package — including Panavision Ultra Panatar large-format anamorphic primes that she paired with Alexa LF and LF Mini cameras — through Panavision’s Auckland, New Zealand, office. 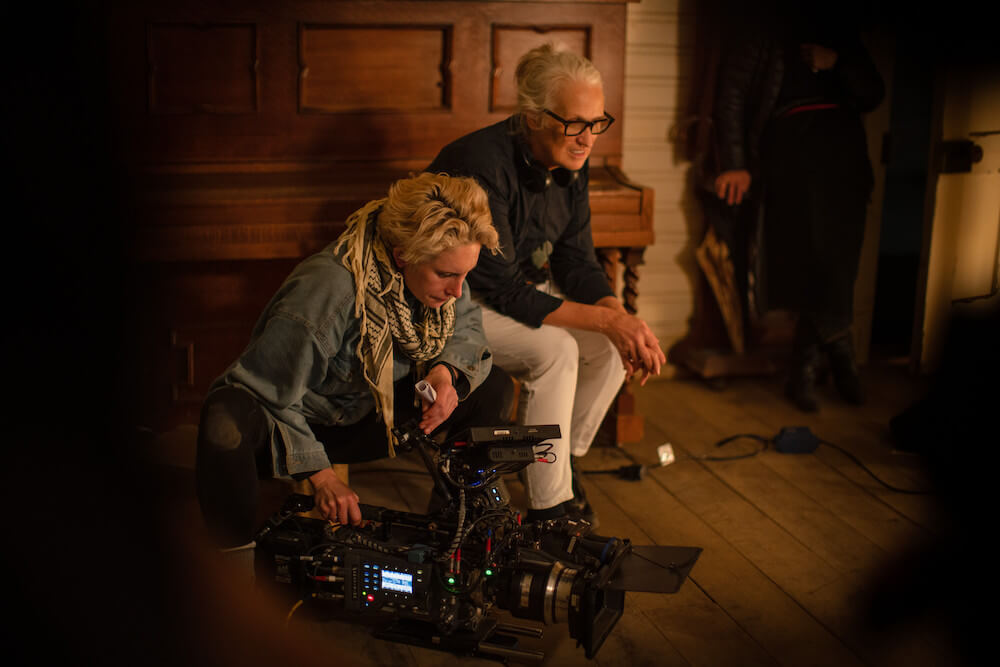 Panavision: How did you and Jane begin to define the look for the movie?

Ari Wegner, ACS: We worked together for about a year before we started shooting, so we had a lot of time to develop the look. That idea of having a long prep and not having to make rush decisions at any point along the way was exciting for both of us. During our prep, we went to a little house not far from where we were going to be shooting, and we spent about a month or a month and a half just shot-listing one-on-one. We’d discuss what we wanted to do visually with a scene, and then we’d each do a drawing and compare what we were thinking.

When we finally got on set, we were able to discover things knowing that we'd done our homework and had such a strong foundation. Jane's always ready to find something better. She's never going to settle, which is such an inspiration. She's always willing to ask, 'Even if that's what we planned, does it work? Is it good?' It was a real pleasure to work in that way.

How would you describe the look of the movie?

Wegner: I would say it’s quite restrained, very deliberate. I don’t know if you’d call it ‘classical,’ but there’s a real respect for traditional filmmaking and crafted lighting. The word ‘unadorned’ kept coming up. If there was something we could get rid of, we would. If the shot would work without movement, then why move? If it would work with less light, why add more?

It was important to us that we avoid the camera becoming too emotionally manipulative. We didn't want the camera or the photography to convince the audience that a character is good or bad. As part of that, we always designed a frame knowing how long it might hold in the edit. We were hoping to make a film with as few cuts as possible, so some of those shots really last. If you're going to hold on a shot for a minute, it can be a very different shot than one that might only be 10 seconds.

Were there any visual references that inspired you during your prep?

Wegner: We looked at a lot of references over that year, and they were as much visual as they were about getting to know the world of 1920s Montana ranch life. We weren’t terribly interested in watching other films — I think we were hoping to make something quite singular. So we stuck to a lot of photography of the period, and painters like Andrew Wyeth or Lucian Freud for minimalism and a restrained color palette. We also discovered the photographer Evelyn Cameron, who was British but actually lived and worked on a Montana ranch around the time the film’s set. It was amazing to see her outsider’s eye looking at this world of ranch life.

Wegner: I’ve worked with Panavision quite a bit in the past, since film school. They’re always my first point of call. I love that whatever city you’re in, you can find support from Panavision. It gives you safety and strength to know you’re never going to be left in the lurch. And glass is always a big factor. Choosing lenses is such a big part of the process, and it’s really important to have options. Working with Panavision, there’s the whole range from contemporary to vintage and technically correct to what I’d call ‘funky.’ We shot with Ultra Panatar 1.3x anamorphic, and obviously that’s not something you’re going to find anywhere else.

How did you decide to use the Ultra Panatars?

Wegner: We’d initially decided to shoot in the 1.85:1 aspect ratio, but when we started drawing, we found our drawings were going off the edges, and the film was telling us it wanted to be widescreen. At the same time, we both knew we weren’t being drawn towards 2x anamorphic. It felt like too strong of a look for what we wanted. When I mentioned the 1.3x anamorphic to Jane, that was really exciting for us, because it was a bit of the best of both worlds, spherical and anamorphic. Plus, a vintage lens is always a lovely thing to have on a period movie.

Can you share more about the language of the camera in this movie? What would motivate you to keep the camera static or to add some movement?

Wegner: We wanted to be deliberate and have a good reason whenever we did want to move the camera. So it was most often about finding where the camera should be and then leaving it there for each shot. Then, when you do move the camera, it becomes very memorable.

For example, there's a scene where Rose [Kirsten Dunst] is playing the piano and Phil [Benedict Cumberbatch] is mocking her with his banjo. When she stops playing, the camera stops moving, and then when she starts again, the camera starts again. We were trying to be in her mind without being too manipulative about it. There's another important scene towards the end of the film with Peter [Kodi Smit-McPhee] and Phil in the barn. We used a long lens on a Steadicam circling around them, so the background's moving in a way that signals to the audience that this is literally something they haven't seen before.

We also had some sequences in a willowy glade, where we wanted to let go of those rules and respond with a handheld camera to what Benedict was doing. That whole sequence is a real exhale from the restrictions at the ranch. We loved that feeling, and we brought a bit of that into the house, so when Phil is unguarded, the camera has more freedom to be curious and responsive to him. That really unlocked something special.

Where were you shooting, and how did you approach incorporating the landscapes into the movie’s visual language?

Wegner: We shot on the South Island of New Zealand. When you go somewhere so gorgeous, it’s the burden of a cinematographer to try to capture it in a way that feels as epic as it is when you’re actually standing there. We wanted to shoot the landscapes in a sensual way, as if they were a body lying down. Jane often described the hills as ‘sexy,’ which they are. It was important for us to wait for the right time of day when the light would shade across them and reveal the contours.

Seeing the landscapes in a telephoto way was really visually satisfying - to see all that detail in the hills and the mountains, which were incredibly far away from the ranch. We could use much longer lenses than I might otherwise have used to shoot a wide, and that felt epic. Jane loves long lenses, and I really fell in love with them as well through her on this project. Before this film, I hadn't really appreciated the power of long lenses in terms of what they can do for the storytelling - that you can stack up layers not just for visual prettiness, but actually to serve the story.

I also love what a long lens does to people in the landscape, in that they can appear more similar size than they would be on a wide lens. A scene that comes to mind is the first time Phil coaxes Peter into the barn, which is a bit of a lion's den. Rose is gardening in the foreground, and we see Peter between her and Phil, deciding whether he should go with his mother or with this man. Within one shot, you can see all of that without having to cut to Peter, and then cut to Phil, and then cut to Rose, and there's not a huge size difference between them, which is really satisfying. You can have the spatial relationships and see the body language all in one shot.

The film also has quite a lot of macro shots, and that also contributes to the feeling of vastness. We'll focus on a very tiny detail and then open up again. The contrast between the shot sizes helps the movie to feel like when it's big, it's big. It's the idea of exhaling again, but in a different way, to be in a claustrophobic frame and then breathe out. We used some time-lapse as well, which also feels epic - the sun moving, the Earth turning. There's a sense of grandeur and that nature is amazing.

Unit photography by Kirsty Griffin. All images courtesy of Netflix.