Cinematographer Seamus Tierney captures the tricks and treats of Hubie Halloween in large format with DXL2. 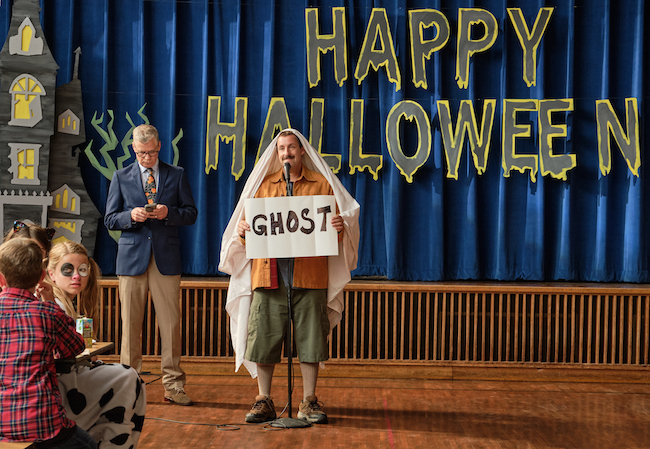 Hubert Shubert "Hubie" Dubois was born and raised in Salem, Mass. He loves his hometown, and as Salem's self-appointed "official volunteer Halloween helper," he makes it his duty every October 31 to ensure a safe and fun holiday is enjoyed by all. But when a patient at the nearby Westfield State Mental Hospital goes missing, a mystery is set in motion that will change the town, and Hubie's life, forever.

Directed by Steve Brill and starring Adam Sandler as Hubie, the Netflix comedy feature Hubie Halloween was photographed in Salem and neighboring towns including Danvers, Marblehead and Beverly. "We shot for 40 days, and we did not stop to breathe once," says cinematographer Seamus Tierney, speaking with Panavision on his lunch break during production of the upcoming Disney+ series The Mighty Ducks. 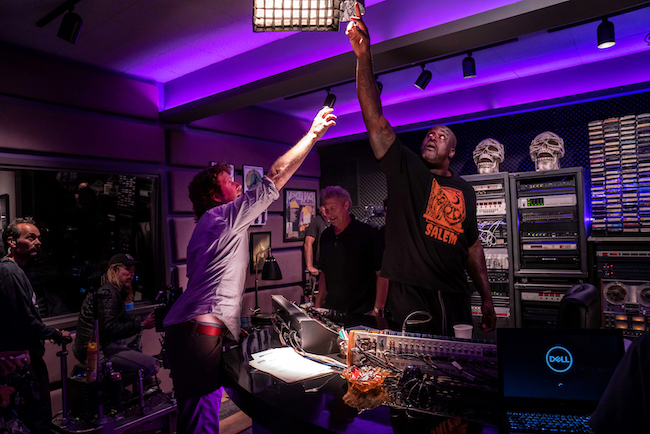 Hubie Halloween marked Tierney’s first collaboration with Brill as well as Sandler’s Happy Madison production company. As soon as he was on board, though, he knew he would reteam with his longtime partner Panavision. “Panavision’s my go-to,” he says. “I’ve been a Panavision guy since before grad school, when I was starting to shoot smaller stuff in New York.”

For Hubie Halloween, Tierney elected to capture large-format 8K with Panavision's Millennium DXL2 camera system. "I knew the DXL2 was the way to go because of all the visual effects we were going to have - I wanted to give them all the Ks, as they say. We shot the movie in the summertime, and they turned it into fall with a lot of digital help that included changing all the leaves.”

This was Tierney's first foray with DXL2, and "it was great," he says, emphasizing details like the internal FIZ control module that allows assistants to streamline the camera's build and minimize its footprint on set. "I was in Boston while my ACs were prepping at Panavision Hollywood, and 1st AC Gunnar Mortensen sent me a picture of the most slimmed-down build he could do with the camera," Tierney recalls. "It was literally just the camera body, the lens, and two little transmitter antennas on the back of it. That's all you need! That was another reason I loved it, because you're getting all of that bang for your buck with the image, but you don't have a huge camera. It blew me away." 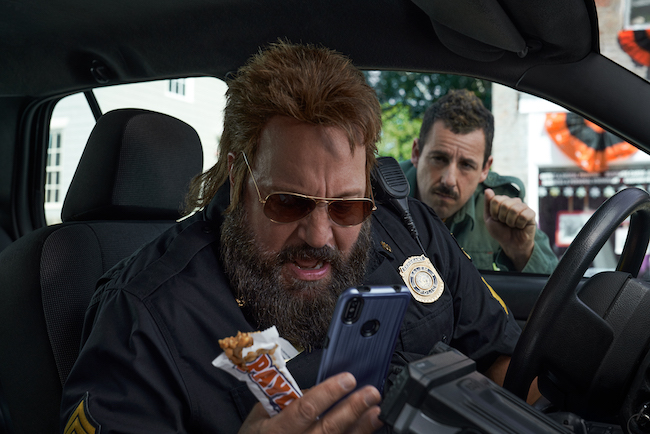 Throughout the movie, Hubie primarily gets around town on his bicycle. Shooting his rides - more than one of which devolve into a chase as he's pursued by a particularly menacing group of kids - required that the filmmakers employ "myriad camera rigs, so we needed the camera to be light an agile," Tierney says. For some shots, he adds, "We had Adam on a bike rig, and other times he was free-riding, and we followed him with a stabilized head on a Miniscope 7 crane on an e-car."

Framing for the 2:1 aspect ratio, the cinematographer paired the DXL2 camera with Panavision Primo 70 lenses. "I love them," he enthuses. "Coupled with the 8K sensor, there's more dimensionality to the image with those lenses. It's like you can reach into the screen and touch it. The Primo 70s coupled with the DXL2 worked out perfectly."

Tierney worked with technical marketing manager Guy McVicker at Panavision Hollywood to "sprinkle unicorn dust on the lenses," the cinematographer says, laughing. "That's what I tell the actors when they ask, 'How does it look so good?' I say, 'Ah, we put a little unicorn dust in there.'

“I wanted to soften the image a little bit and have some of the highlights go kind of bloomy like an older film stock,” he adds. He achieved the look in combination with diffusion on the lens. “I used an older Net 1 filter, which is more than I normally would on a movie, but I just fell in love with it. It reminded me of that softer look of Peter Weir films like Witness or Dead Poets Society.”

In some shots, the Net diffusion's pattern can be seen in the out-of-focus highlights in the background of the frame. Tierney remembers, "The AC asked me, 'Are you okay with that?' And I thought, 'The rest of the image looks so cool, let's just embrace it.'" 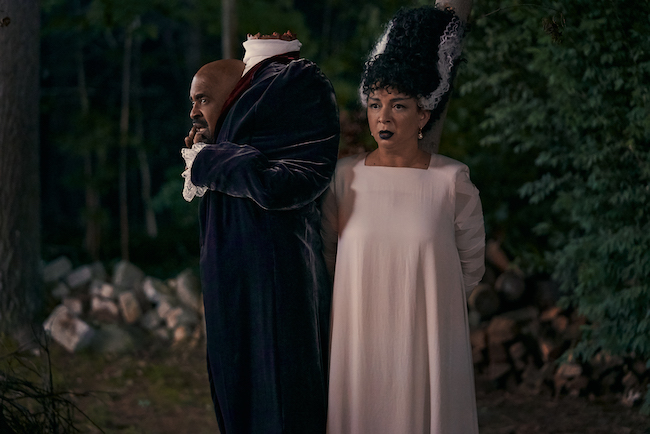 With his prime lenses, Tierney tended to stay on wider focal lengths, and he typically maintained a shooting stop of around T2.8½. "The director likes clean singles, where you're wider and closer, which can be funnier and a little more visceral," the cinematographer explains. "With the large format, the depth of field is shallower, so when you're closer and wider, it falls off in a very nice way."

The combination of large-format optics, rich contrast and bold colors lend Hubie Halloween a distinct look that perfectly suits its subject. "We talked a lot about making it look like an '80s movie, which let us have a little more pop in the colors," Tierney says. "It didn't have to be so naturalistic. I wanted it to be darker, more saturated, with richer colors, and juxtapose the comedy against that. We allowed ourselves to have a little more fun with it because of the subject matter and because it’s an Adam Sandler film.”

The palette includes a pronounced use of the color orange, which is woven into the wardrobe and production design as well the lighting, with Halloween-themed holiday lights often visible in frame. "Perry Blake is an amazing production designer, and his team always had accents we could throw in the background," Tierney notes. "I wanted as much scope as possible, and one of the easiest ways to do it is to throw holiday lights around a bush two blocks away and add a little twinkle back there.

"Perry and I talked through every single set," the cinematographer continues. "He showed me his plans, we would talk about light, and we would excite each other to a fever pitch trying to make sure it would be a Halloween film and not just a straight-up comedy. It was a pleasure to work with him." 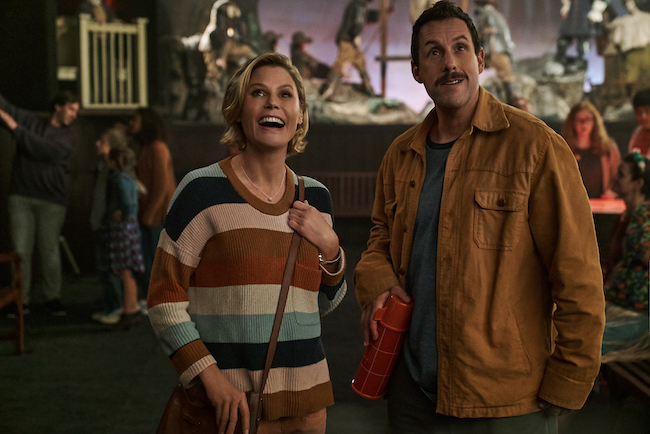 Appropriately for a movie set on All Hallows’ Eve, Hubie Halloween features a good deal of night-exterior work. Tierney credits the DXL2’s native 1600 ISO as being “a life saver in a lot of places. It really helped.”

While night exteriors in neighborhoods decorated for trick-or-treating afforded ample motivation for Tierney's lighting, scenes in more remote locales - such as a pumpkin patch where Hubie encounters his strange new neighbor, Walter Lambert (Steve Buscemi), who may or may not be a werewolf - had to appear as though they were lit by nothing more than the full moon. To establish a moonlight ambience, the crew worked "mostly with balloon lights and lifts," Tierney explains. "When Hubie meets Walter in the pumpkin patch, there's a wide shot with the moon between them. I asked the visual-effects team, 'If I put my balloon there, can you turn it into the moon afterwards?' And that's what they did - for a few scenes!

"There was one shot, though, where Adam comes up a hill toward the radio station," he continues. "The camera tilts up as he gets to the top of the hill, and the moon's behind him with all of these crazy clouds. That was the actual moon and cloud configuration. We got super-lucky."

Another sequence finds Hubie in a corn maze, a real exterior that required careful planning from the earliest stages of preproduction. The filmmakers made the maze themselves, planting the corn during prep and letting it grow until it came time to shoot the sequence. The production shot in the maze over two nights - "the only set we were on for more than one day," Tierney notes - during which the crew nevertheless had to move fast in order to cover all of the action. "Gaffer Rick Thomas, key grip Jeff Kunkel and I were like, 'How do we light this so we can work quickly without having to move lights?'" Tierney reflects. "We built this big 'moon box' on a 300-foot construction crane, so we had to get the Army Corps of Engineers to come in and make sure we could put it in this corn field. The moon box was on chain motors so it could tilt in four directions, and it allowed us to just keep shooting. It saved us a lot of time and really helped us make our days." 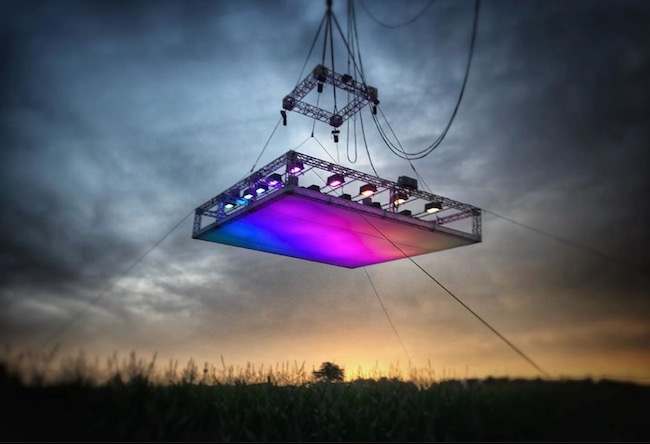 When Hubie hears suspicious sounds emanating from Walter's house, he ventures inside to investigate the darkened interior, with his flashlight - one of many customizations he's added to his all-purpose and ever-present thermos - providing the only source of illumination when he descends into the basement. "It was a very powerful xenon flashlight," Tierney says. Laughing, he recalls, "I was like, 'This has to be super-bright! It has to light the whole scene!' And then it came time to actually shoot with it, and I ended up having to gel it down with an ND.9 or an ND1.2. I probably could have gone with a much dimmer light, but you know, better safe than sorry!"

For the basement scene, the bounced light from the flashlight was indeed all that lit Sandler, with Tierney hand-holding beadboard off camera to direct the bounce. "I stole that from Conrad Hall [ASC], from the movie Jennifer 8, when Andy Garcia's going around the blind institute," the cinematographer acknowledges. "There's a famous story that Andy Garcia was doing the flashlight, but Connie Hall was in front of him with a piece of beadboard, kicking light back on his face."

Hubie Halloween, Tierney reflects, “was such a fun movie to make, and I have never worked with a nicer group of people. The Happy Madison folks and all the actors were all so happy to be there but also very professional — you had to be on your A game the whole time, which I love.

“At the end of every day, I was so happy and excited with the images that we were getting,” he adds. “Our very last night was the scene when Hubie meets Violet [Julie Bowen] out by the light house. I wanted it to be our Casablanca moment, where she steps out of the fog. It was the biggest setup I’ve ever seen as a DP. We had boats in the harbor pumping in fog, I had two barges with big soft boxes on them, and I just thought, ‘It’s never going to get better than this!’ It was the perfect mix of a fun and challenging experience with a great reward.” 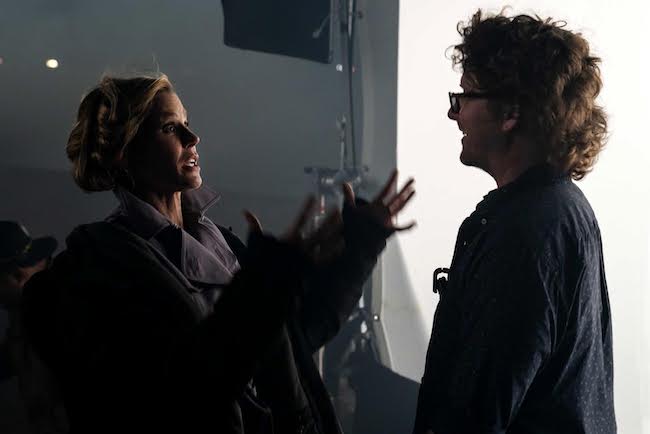