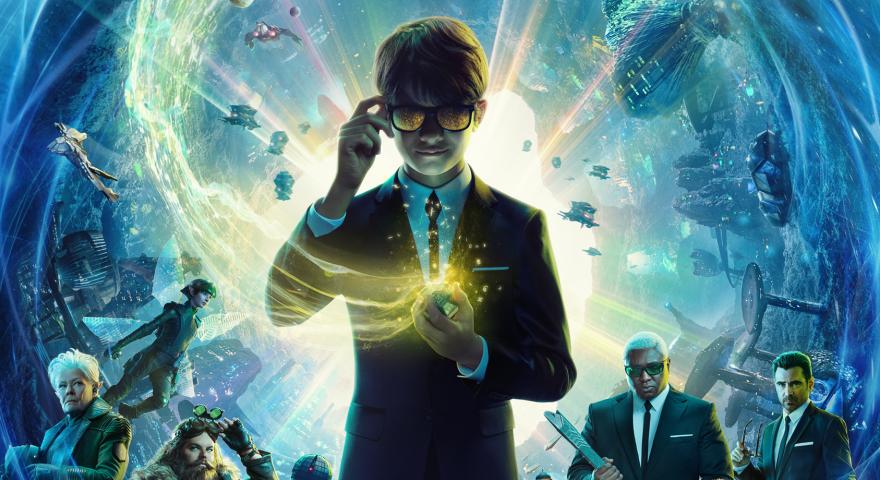 Based on the series of novels by Eoin Colfer, the feature Artemis Fowl finds its namesake — a precocious, hyperintelligent 12-year-old boy (played by Ferdia Shaw) — just after his father (Colin Farrell) has gone missing from their estate in Ireland. Young Artemis soon finds the first in a trail of clues that, in leading him back to his father, will also unlock a magical world populated by fairies, trolls and other creatures the young boy had thought to be merely the stuff of legend and myth.

Artemis Fowl was cinematographer Haris Zambarloukos, BSC, GSC’s sixth feature collaboration with director Kenneth Branagh; their seventh, Death on the Nile, is slated for release later this year. Over the course of their collaboration, Zambarloukos notes, “There’s a trust that’s built up, an understanding, a similar love of storytelling, certain social views that you want to share in filmmaking and that then enrich a professional friendship. That’s what it’s become: a very rewarding professional friendship. We push each other and encourage each other very well.” 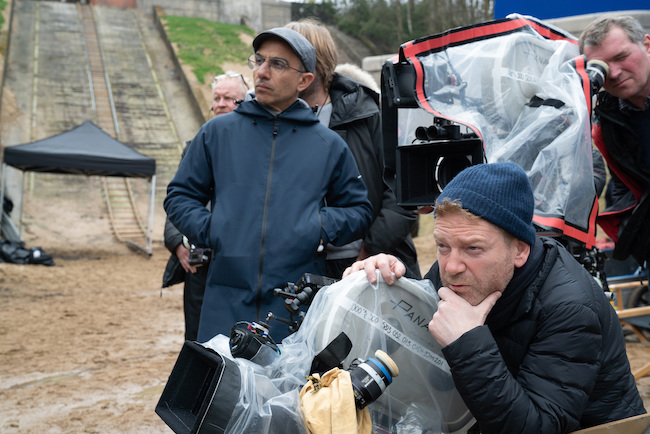 As prep got underway on Artemis Fowl, Branagh and Zambarloukos looked at a wide range of visual references, including “a certain type of entertaining storytelling in the vein of Spielberg and Indiana Jones, where things have a breadth and happen quickly,” the cinematographer says. Inspired by the same Irish mythology from which Artemis Fowl draws, the filmmakers also looked to nature itself. "The documentary series Blue Planet II became a really big influence and provided our references for [the subterranean] Haven City. We were going to the natural world to get something extremely fictional — and that was always the case with Irish mythology, which had its roots in a love of the Earth, in a natural beauty that blends into a more magical beauty.”

The filmmakers considered shooting on 65mm film but ultimately opted for anamorphic 35mm, working primarily with Primo anamorphic primes. "Ken was talking about a fast-paced camera, and [the Millennium XL2 35mm camera system allowed for] a few more tricks up our sleeve," Zambarloukos shares. "But we still wanted the extreme high fidelity and immersion that you have from 65mm, and we found a middle ground between traditional 35mm and 65mm by using Primo anamorphics and, as much as we could, lower ASA film, Kodak's 200T [Vision3 5213, for day interiors] and 50D [5203, for day exteriors], and we only went to 500T [5219] when we needed it."

Zambarloukos sourced his camera and lens package with the help of Panavision's Hugh Whittaker and Charlie Todman. Supplementing the Primo anamorphics, the production carried G Series primes - primarily for Steadicam shots, operated by Stamos Triantafyllos - and select other optics. In picking his lens package, the cinematographer followed what he calls his "standard procedure." He explains, "Charlie Todman, 1st AC Dean Thompson and I will sit in the lens-projection room at [Panavision's facility in] Greenford and project as many lenses as we can to pick our sets. Despite going Primo, I still look for a teeny bit of falloff on the edges, and the extreme sharpness in the middle."

On set, the cinematographer predominantly used focal lengths "in the 35mm to 75mm range," he says. "We definitely went wider, but that midrange is where you spend most of your time, especially with kids. That's where the human eye sits, really." 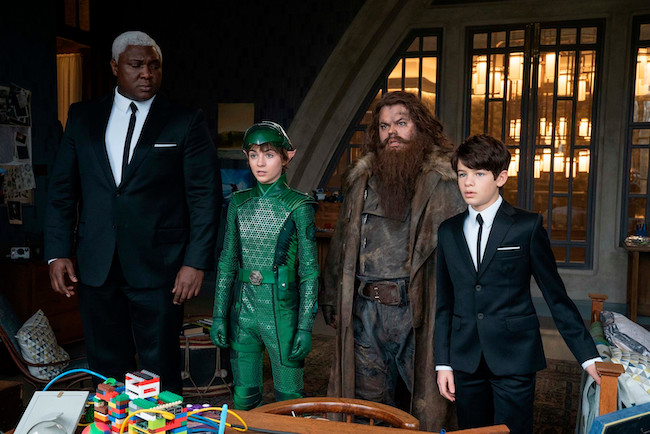 Principal photography on Artemis Fowl took place in 2018, with the majority of the shooting done at Longcross Studios in Chertsey, England. There, the production built Fowl Manor — the mansion home to the film’s eponymous hero — as a self-contained “location,” with a fully realized interior and exterior that allowed the camera to “roam from inside to outside and back in continuous shots,” Zambarloukos explains.

“It took a lot of planning to give Haris and Ken full rein to shoot where they wanted to at any time,” says gaffer Julian White, whose collaboration with Zambarloukos traces back to the 2004 feature Spivs. HMIs were positioned on cranes outside to push hard “daylight” into the house interior, while bi-color LED banks were rigged to provide “an aggressive soft light through the huge windows,” White notes. Inside, he adds, “Rigging gaffer Dan Lowe and his team installed a steel rig in the ceiling very much like you would have on a traditional stage, which meant that electric hoists could be added and repositioned quickly. The whole set was installed with a full electrical three-phase system and Wi-Fi control.”

"On top of all that," Zambarloukos says, "practical lighting was done hand in hand with Jim Clay, our production designer. So Julian White, Dan Lowe and practical electrician Joe McGee made a plan and fitted out the house [with bi-color LEDs] so everything was DMX-able, everything had temperature control, and everything went back to the same [lighting console]." The overall approach to Fowl Manor allowed Zambarloukos to shoot inside with the 200 ASA stock at his preferred stop of T4.

The production's lighting package was sourced through Panalux. "With Ken, we do these really intricate, difficult sets and studio pictures that require you to rethink everything every time," the cinematographer says. "It's so bespoke; there's no set way of doing this. No one's built a house like that for a set, three stories high, inside and out, all functioning, all lit. So when we go to Panalux and we say, 'Can we do this?' we all start together. And there's a fantastic sense that, 'Of course we can,' and 'please come and test.' It's a team effort." 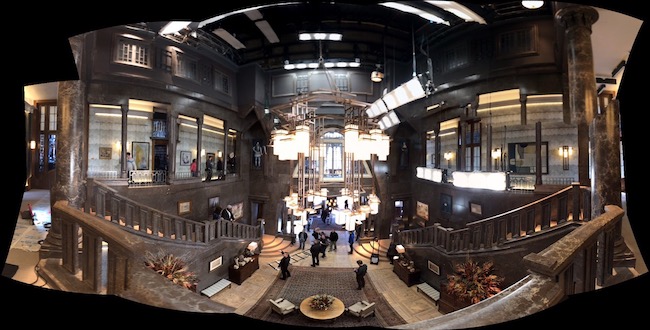 "We spent a lot of time testing and sourcing the right materials," White adds. "Rob Garvie, Paul Dooley and the Panalux team were fantastic in their support from prep through to finish. The movie was never straightforward in its installation, and without that support it would've been very difficult."

Among the units that Panalux helped the production source were "tunable-white GLP Impression X4s that could be dropped in and out of recessed ceiling sections on lightweight electric winches," White details. "For smaller lights we used 60cm soft RGBW LED tube lights that Panalux made. They are lightweight, Wi-Fi-controlled and battery-operated, and they proved to be a quick and easy eye light or modeling light. I would add a PVC diffusion or unbleached muslin to further soften them."

In moving the camera, Zambarloukos and key grip Malcolm Huse worked with a support package from Panavision that included a Scorpio 45 crane for the run of the show and an array of systems, among them a SuperTechno 75, that came out for select days. "As always, [Panavision's Alan Smith, aka] 'Wolfie' was so helpful and part of the whole process," the cinematographer shares. "I see everyone there as teammates.

“Ken gave us really demanding crane shots to accomplish, and Luke Redgrave, our A-camera operator, did that fantastically,” Zambarloukos continues. “He’s been with me on the crew for 16 years as a B operator, and this was the first time he stepped up to A. We’re such good friends and such great collaborators, much like Ken and I are. He was on the first film I did with Ken, Sleuth, and he has since done Nile as A-camera operator. He’s an incredible operator, and his crane work is superb.”

Another key set for the production was Haven City. This underground metropolis, home to fairies, elves, goblins and other magical creatures, was built on the 42,000-square-foot Stage 1 at Longcross Studios, where "we literally went wall to wall and floor to ceiling," Zambarloukos notes. As with Fowl Manor, this expansive approach allowed the camera to move continuously from one section of the Haven City environment to another. "We had a lot of interactive RGB lighting in all of that, and again a lot of practical lighting," he adds.

Bluescreen, lit with Panalux FloBanks, lined the stage walls, and over the set, White notes, "we built large soft boxes of approximately 24-by-12 feet, again on electric hoists. We could use these to change color and direction at any point, which allowed for very quick turnarounds."

The production's approach to its principal sets, Zambarloukos reflects, helped to make the story's settings that much more real for the actors and, by extension, the audience. "Ken has a real sensibility for camera and cinematography, and in return, what we try to do is get his actors to feel like they're there. We're talking about 11- and 12-year-old children. They felt they were there; they felt all the things that they were supposed to. They had a sense of place and movement. You can't go all the way, but you go steps of the way, and those steps have an emotional impact that the audience feels through the actors' reaction to being in that situation." 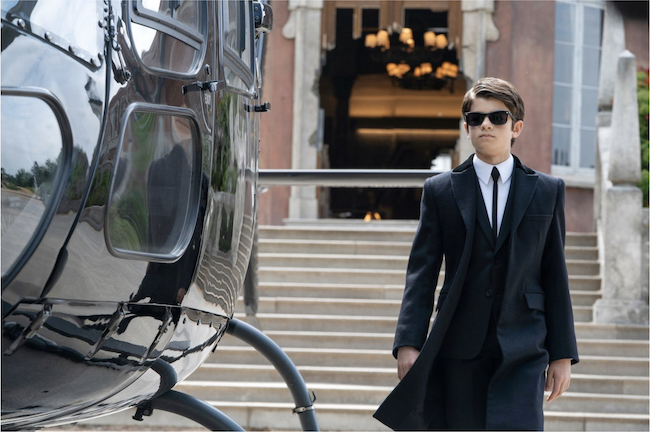