Polly Morgan, ASC, BSC discusses her collaboration with director Olivia Newman and their choice of optics for the feature Where the Crawdads Sing.

Based on the best-selling mystery novel of the same name, the feature Where the Crawdads Sing tells the story of Kya (Daisy Edgar-Jones), a young woman who grew up isolated in the North Carolina marshes and is implicated in a murder. Directed by Olivia Newman, the movie was shot by cinematographer Polly Morgan, ASC, BSC, whose long history of working with Panavision goes back to her days as a production assistant in London. Panavision recently spoke with Morgan about her collaboration with Newman and their choice of optics for the feature.

Panavision: What attracted you to Where the Crawdads Sing?

Polly Morgan, ASC, BSC: I read the book during the pandemic in the summer of 2020. I was pregnant, and when I read about this young girl growing up alone in nature, it really resonated with me and my experience as a child. I grew up in remote English countryside, in a valley next to a river. The country road that led to our farmhouse was a mile long, completely off the beaten track. I would spend lots of my time down by the riverbanks and walking through the woods alone. I deeply connected with Kya’s story, her love of nature and her resilience to succeed no matter what life threw at her.

How did you become involved in shooting the movie?

Morgan: After I had my son in October [2020], my agent told me they were going to make the book into a movie. She tried for a long time to get me an interview with the director, but I wasn't on the list of DPs that the studio were looking at. With no other option, I wrote Livi a letter, expressing how much I loved the book, what it meant to me and how much I would love to work together to bring the story to life.

After she got my letter, we arranged a Zoom call and then talked for hours. I had made a pitch deck showing inspirations and ideas for the visuals, and we were on exactly the same page. In fact, she showed me the book she created when meeting for the job, and they were very similar.

After my meeting with Livi, I had to then go through a series of meetings with producers and studio execs. I think there was some trepidation because they didn't see much nature work in the material that I had shot before; in this business, unless you've already proven that you can do something, people are nervous that you can't do it. Luckily, they responded to the deck I had put together, and when I discussed our plans with camera movement, they felt more at ease.

When I got to the call to say I had been offered the job, I was overwhelmed. I was so excited to get to work with Livi and thrilled that I was going to be able to create the imagery I had imagined when reading the book.

Can you describe the pitch deck you made?

Morgan: I organized the book based on themes of color and how different colors and contrast would play within Kya’s life. I highlighted the difference in contrast and color in the present-day courtroom and jail with the time periods of the 1950s, ’60s and ’70s, from Kya’s childhood, and through her life as a young woman. My references were based on bringing the natural world into the viewer's experience in a subjective way to connect them emotionally to the story. I used references from [the movies of] Terrence Malick, Jane Campion and David Lowery, images that focused on the play of light and quiet details. The concept was to make a commercial movie that was still artful and had a balance of scope and intimacy.

How would you describe the look that you and Olivia Newman wanted for the movie?

Morgan: I suppose it's cinematic naturalism. The look is very soft and pretty. We embraced a pastel color palette and created a neutral LUT that was very true to the colors created by the production and costume designers. There is so much green in the frame, so we stayed away from any warmth that would add yellow and make the greens feel digital and artificial.

My approach to lighting was to always make sure that we had details in the shadows, with no deep, rich blacks. The landscape at night can very quickly fall into nothing, so I hid fixtures deep in the background to ensure there was always detail in the image and that the contrast would remain soft all the way through post.

Livi and I had a very clear idea of how we wanted to move the camera and frame the image. We wanted to do things to make it more unique to us, like certain angles that spoke emotionally to Kya's internal state. We played with focus and various modes of camera support. The words in the book are so lyrical, and we wanted the camera movement to reflect that. We employed Steadicam and various arms to move the camera as well as keeping a remote head on the dolly and always moving with the action on dance floor or track. Handheld was also employed for the more intimate and emotional scenes.

You ended up using a new set of Panavision prototype large-format spherical lenses for the movie. What made you choose those lenses for the look you wanted?

Morgan: Dan Sasaki [Panavision’s senior vice president of optical engineering and lens strategy] reached out to me during Covid, and we talked about an independent movie I was going to do that was about a female running out in the countryside. I knew I wouldn’t be able to control the light, so I was looking for lenses that were going to be softer so the natural light wouldn’t be so harsh on the actor’s face. He mentioned some prototypes that he was building and said they might work really well.

I never shot that movie, as I was having my baby by the time it went, but when I spoke to Livi, we talked about lenses, and I knew that Dan's glass would be a great fit. I knew I wanted to shoot the movie in large format to embrace a more expansive field of view, and I also knew that anamorphic lenses would counteract that.

I took Livi out to Panavision in Woodland Hills to chat with Dan. We looked at a variety of lenses, and he showed us the prototypes. The lenses had interesting and unique artifacts that I always look for in glass. I tend to veer towards optics that aren't perfect but have unique qualities to them - Dan often refers these kinds of lenses as the 'naughty children.' Each lens in the set had unique qualities and its own personality. I liked the 28mm for more 'dreamy' storytelling and the 40mm for portraiture.

As well as the look, the prototypes were very lightweight. As I wanted the camera to always have the ability to move, I knew I would be on the DJI Ronin [handheld gimbal], which performs better when the camera system is not constrained by its weight. With the prototypes in combination with the Alexa Mini LF, we were able to move fast and be flexible. 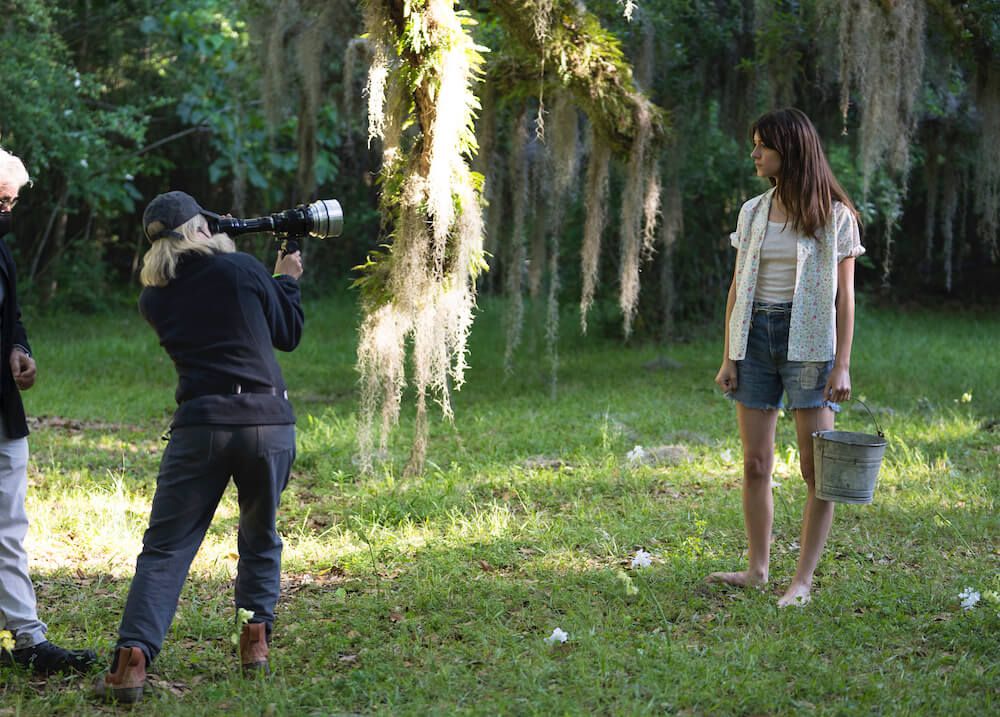 Director Olivia Newman finds her frame for a shot of actor Daisy Edgar-Jones.

Tommy Maddox-Upshaw, ASC, who shot much of the series The Man Who Fell to Earth, used another iteration of these prototypes and mentioned the colors they brought out were very rich, and there was a rounding of the image that proved great for portraiture. What did you discover about the prototypes during testing and then during shooting?

Morgan: I definitely agree with the rounding. The focus falloff was beautiful, as was the distortion on the edges of the frame. When we went to test with Dan, we looked at anamorphic lenses, and there were certain anamorphic artifacts that we really loved, but we knew the anamorphic format wasn’t going to be right for the film. The spherical prototypes acted much more like anamorphic lenses as far as falloff, pulling focus when subjects entered or crossed the frame, and the distortion. The anamorphic qualities added a 3D feel to the lenses, where the characters are pulled out of their environment, which speaks to that portraiture look. Instead of everything feeling flat, there was a lot of dimension because what was in-focus was pulled out and everything else fell off so beautifully.

How would you measure the experience of shooting this film with that of your other work?

Morgan: Having done [the series] Legion, which is incredibly stylized, and also [the features] Lucy in the Sky and A Quiet Place Part II — a sci-fi and then a horror-thriller — the studio were concerned that I hadn't shot nature before. They wanted the movie to have a very commercial feel. It was a new experience for me to create a look that answered their brief while keeping a feeling of artfulness and emotion that I felt was right for the story.

I think the most challenging aspect of Crawdads was the large amount of day-exterior work in the tumultuous weather of Louisiana. A lot of it was in very remote places or out on the water, so I couldn’t use any tools to help soften the light. I had to rely on scheduling the scenes at the right time — and also a bit of luck! 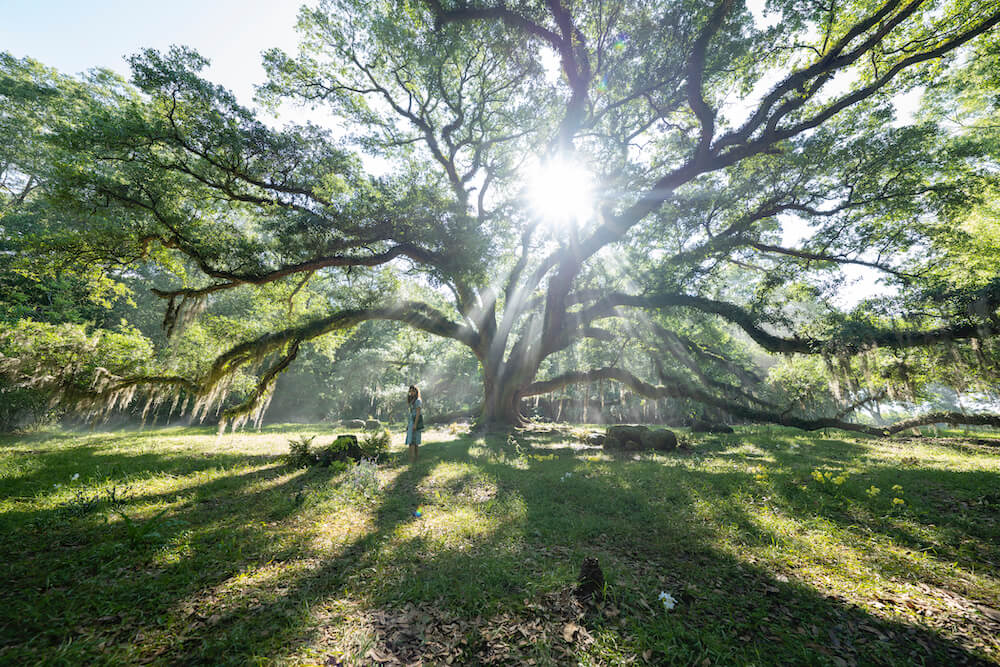