Alice Brooks, ASC recounts the journey that led her to the feature tick, tick… BOOM!

Based on playwright Jonathan Larson’s autobiographical stage musical, the movie tick, tick… BOOM! marks the feature directorial debut of Lin-Manuel Miranda, who partnered with cinematographer Alice Brooks, ASC. The two had met on director Jon M. Chu’s musical feature In the Heights, which itself was based on Miranda’s stage musical. 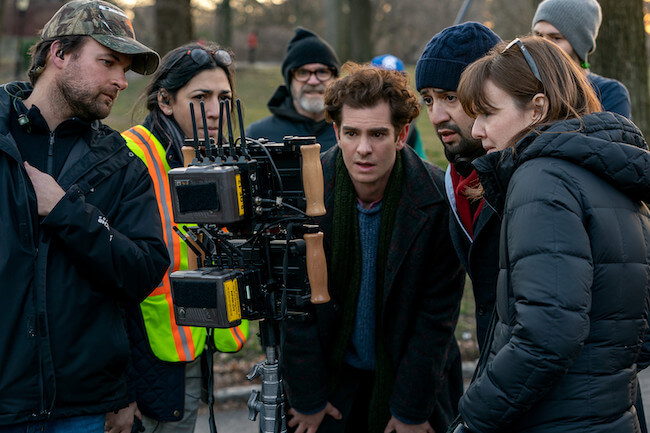 Panavision: How did you come to partner with Lin-Manuel Miranda for this project?

Alice Brooks, ASC: We’d met on In the Heights, and on the last day of that movie, my agent sent me the script for tick, tick… BOOM! and said, 'Lin would like to meet you on Tuesday.' So I had the weekend to read the script and prep for this meeting, and as I started turning the pages, I was like, 'Whoa, this could be a scene from my life.' It's about Jonathan Larson, who wrote Rent. He’s living in Manhattan, in a tenement apartment building with a bathtub in the kitchen, and that was very similar to my childhood. My father was a playwright, and we had a bathtub in the kitchen. Our whole family lived there, and all my father's friends were always in our house. There's a number very early on in tick, tick... BOOM! called ‘Boho Days,’ with all of Jonathan's friends, and it reminded me very much of the community of my childhood with all these artists.

And so, on the first page of my look book, I put pictures of me and my family when I was 10 in New York, because this movie takes place in 1990, and I was 10 in 1990. My memory of New York in 1990 is a child's memory, where color and light and emotions are heightened and sometimes the lines between dreams and reality are blurred, and Jonathan Larson is this childlike artist who doesn't want to grow up. The first number's called '30/90,' where Jonathan sings about being Peter Pan and 'finding Never Never Land.' He doesn't want to grow up, he doesn't want to sell out on his dreams. Lin was also 10 in 1990, so that was where we started creating the look from - this childlike perspective where sometimes the line between dreams and reality are blurred.

Were there other key references that you and Lin shared?

What led you to shoot on DXL2?

Brooks: The first time I used the DXL2 was on the Apple series Home Before Dark. I tested tons of cameras for that project and landed on the DXL2. Then when we did In the Heights, I again did lots of testing, and I again landed on the DXL2. On tick, tick... BOOM!,  I asked Lin, 'How involved do you want to be in the camera choice?' And he said, 'I want to learn everything,' because this was his first movie [as director]. And he really is a sponge for information. So I went to Panavision, shot tests with different cameras and different lenses, and then we went to the lab and projected them. Lin sat next to me, and it was pretty much a blind test for him, and we ended up shooting on the DXL2 again.

I love the large format, and there's something that the DXL2 sensor does that other cameras don't do to the bokeh on anamorphic lenses. First we decided we were going to shoot anamorphic, and then we picked the DXL2 because we loved the way it rendered out-of-focus light on the New York City streets at night.

When did you first start working with Panavision?

Brooks: Panavision has been an incredible champion of mine since I was in college. They provided me with cameras when I was at USC, and after I graduated, I did projects through Panavision’s New Filmmaker Program. They really nurture their relationships with young cinematographers. I can't imagine a better partner.

One of the very first times I worked with Panavision was on a short musical called When the Kids Are Away. It’s the musical Jon Chu directed as his thesis film, and Jon still has the letter he wrote to [Panavision] about our movie and why we wanted to use Panavision. This was in 2002, and Panavision let us use the new Panavised [Sony] F900. That was pretty exciting!

What was your path toward becoming a cinematographer?

Brooks: I lived in the dark room in high school, and then I went to USC for film school. After film school, I realized I didn't have enough for my reel, so I spent the following year offering to shoot thesis films for all the graduate students. I ended up shooting somewhere between 20 and 30 films that year. I learned so much and met so many wonderful filmmakers, and then I was able then to start making small indie movies.

What initially inspired you to pursue a career behind the camera?

Brooks: I actually grew up a child actress in New York, and I did almost 40 national commercials when I was a kid. It exposed me to film, and I fell in love with the camera people. I thought they were the nicest human beings, and I loved the magic they created. I remember one of the last commercials I did in New York before my family moved to Los Angeles was for Prodigy, which was an early internet service company. It was me and two other girls, and we were supposed to be messaging a boy. We were actually playing computer games, and after two hours, we were told, ‘Okay, you can go home.’ I was crushed — I thought we were being fired! But then they were like, ‘No, no, we got what we needed.’ I saw the commercial a little while later and realized they’d filmed us while we played video games, and then they shot the reverse separately. That was my first insight into the magic of how movies are made.

Then, when I was 15, I had seven auditions for the same role in a movie. It ended up being between me and one other person. On the last day, my mom and I left the audition and went for a walk on the beach in Santa Monica, and I said, 'Mom, I don't want to be an actress. I want to be a cinematographer.' I looked down, and there was this little white-and-gray feather. I picked it up, and I still carry that with me all the time, as a reminder of that moment when I declared my dream.

Unit photography by Macall Polay. All images courtesy of Netflix.