The cinematographer offers a behind-the-scenes look at shooting the three-part project The Trees Remember with DXL2. 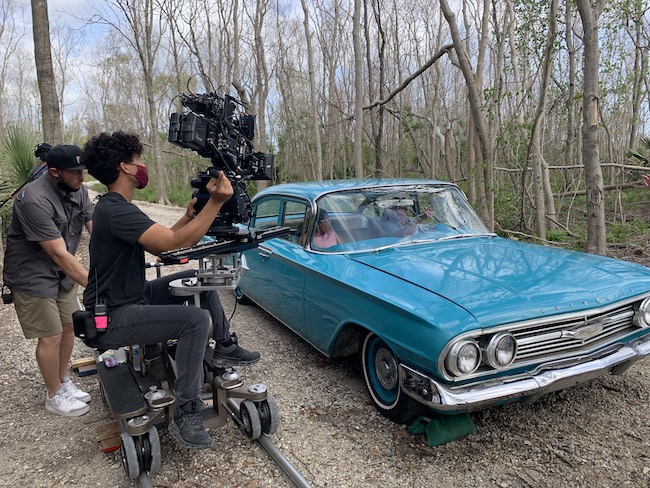 From a young age, Bron Moyi knew he wanted to tell stories with images. As a teenager, he would shoot skits and short movies with his family's Handycam, and still photos with his grandfather's vintage film camera. Fast forward to present day, and Moyi is now an established photographer and cinematographer with a body of work that includes music videos, commercials, narrative features and documentary shorts. In 2018, his talent was recognized with the Best Cinematography Award at the 29th Annual New Orleans Film Festival.

Moyi recently had the opportunity to work on the three-part series The Trees Remember for REI Co-op Studios. Directed by Emmy-nominated filmmaker Angela Tucker and developed by her TuckerGurl production company, the series of fiction shorts feature Black women of different ages growing and thriving in the outdoors. The series aims to help expand the historically narrow definition of the outdoors and address barriers to collective healing outside. The three stories span 60 years, with Movement set in 1960 during the civil rights movement, Maintenance set in 1990 in a woodsy Philadelphia park, and Migration set in 2020 in New Orleans.

Panavision recently spoke with Moyi to discuss his work on The Trees Remember, which he captured in three formats — Super 35, anamorphic, and large format —with three distinct lens series, all with Panavision’s Millennium DXL2 camera system. 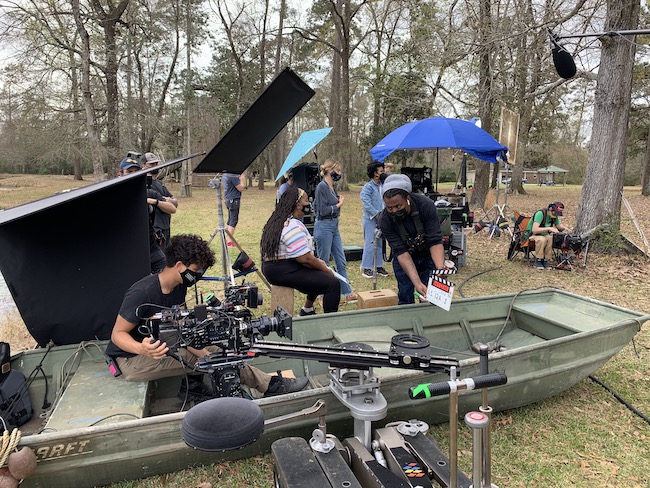 Panavision: You wanted to work in the film industry at a young age. When did you get your start?

Bron Moyi: My grandfather is really supportive and gifted me my first digital camera, which I thought was incredible. It was around that time when I started doing photos and videos around town. I had my first client at 17 — a friend of mine in high school who wanted a baseball promo that he could send off to colleges to get a scholarship. It turned out well, and he actually did play in Miami semi-professionally, which is cool.

His uncle is a production designer, so that project led to my first real job in the film industry, which was working as an art department PA on a movie that the creators of The Blair Witch Project did. I think I was 19 when I first got on set, and I was like, ‘This is exactly what I want to do with my life.’

I spent a number of years working in the art department, and I always found myself trying to bump shoulders with the people in the camera department and asking them a lot of questions about the gear. I would also do independent projects as a DP for music videos and short films, and eventually I made the switch over to camera as an AC. Just within the last three years I made the jump to working as a DP full time.

How did you get involved in The Trees Remember?

Moyi: I knew Angela Tucker as a creative around New Orleans, but the person who really put my name out there was one of the producers, Jeremy Blum. He was already signed on to produce with Angela, and we had worked a lot together. The intention with the project was to give opportunities to as many women and people of color as possible in department-head positions. As one of the first people they reached out to, I was honored.

I had wanted to work with Angela, and after working so much in documentary throughout the pandemic, I was itching to do something scripted. When Jeremy told me about the concept behind the project, that it was a series of narratives highlighting Black stories in outdoor spaces, I thought that sounded amazing. Then, when I read the story outlines, I could see what they were trying to do, and I was like, 'I'm in.'

Moyi: I think it was always going to be Panavision. I honestly think Panavision is the best rental house in New Orleans that I’ve worked with. I remember the first time I worked on a set where I knew what Panavision was. I saw a Panavision lens case and was like, ‘Whoa, this is a Panavision show.’ I was so excited.

When I started assisting, the first time I was in Panavision to prep was a milestone experience for me. I introduced myself to Steve Krul, the sales rep, and started to develop a relationship. We knew some of the same people, younger DPs who were friends of mine. Even then I think I told him that I was trying to DP, and I remember him, from the beginning, being very supportive and saying, 'Whenever you have a job, come through.' That was probably four and half years ago.

For The Trees Remember, through my talks with Angela, I knew we wanted to distinguish each of the stories visually. Because it was a tight schedule, there was this idea that we would only use one camera, but we should at least try to change lenses. I knew we weren’t going to get any better lenses than at Panavision.

Which lenses did you choose for each of the three stories?

Moyi: When Angela brought up the fact that the stories were in these three different decades, I knew there was an opportunity to not only explore the history of the characters and all these ideas in the film, but also to explore the history of lenses. I was asking myself, ‘What lenses were physically around when these stories would have happened?’

I knew I wanted anamorphic lenses for the 1960s. I also wanted the image to feel a little bit gritty, which is why I wanted to go with more vintage anamorphic lenses. But I didn't want it to be overly stylized or feel visually distracting, like the characteristics of the lenses were overshadowing what was going on in the story. The DIT and I were at Panavision for two days testing lenses, and I fell in love with the B Series anamorphics. They're gorgeous lenses, sharp but not too sharp, and they have a natural warmth to them, which I really love.

With the 1990s story, we were trying to go for a '90s vibe. 'Campy' might be the word. I went with Zeiss Super Speeds because they're some of my favorite lenses and they're so appropriate for that time. They just felt right to me.

I think the contemporary story, Migrations, was the clearest for me in terms of its visual style. The emotions surrounding quarantine and the pandemic were still fresh; the story wanted to feel darker and isolated but gradually introduce more life, levity and freedom. I thought large format would feel the most contemporary, and I knew we’d be able to get this very shallow depth of field so we could play with the idea of isolation through focus. I was set on the Primo 70s. They have such a beautiful, clean image, but not clinically clean. They have some warmth. 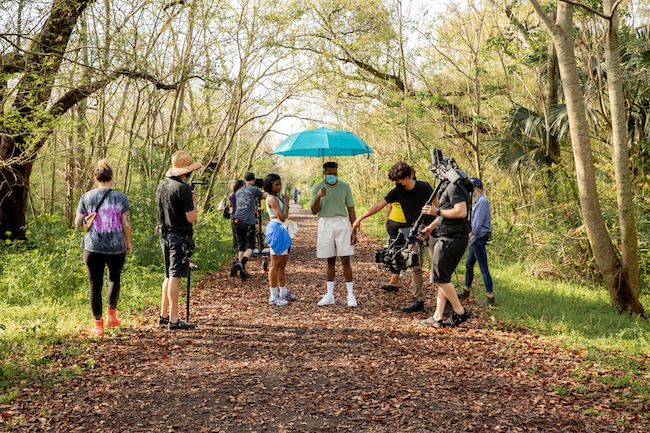 What led you to work with DXL2 for this project?

Moyi: I knew we needed one camera that could seamlessly switch between the three different lens sets. I’d never worked with the DXL2, but when I was talking to Steve about the project, he suggested I should take a look at it. He said, ‘I think this is the camera for what you’re trying to do. You’ll be able to have all the lenses with you and swap mounts as you need to.’

So, when we did the lens test, we had a DXL2 with us. The image we saw on the monitor was beautiful. I was really sold by how it rendered blacks and how much dynamic range there was. It's a really rich image. I also thought it was great in the way it handled the file sizes. We didn't have to carry a ton of media, which was definitely good for the DIT, who was loading the footage at the end. Size was also a factor - I was surprised how compact it is - and I thought the Primo viewfinder was great, with a really crisp, clear image.

But the biggest and most important feature for us was being able to easily switch between lens formats. It really was seamless. We used the same 2.35:1 aspect ratio through the three films, so it was really about determining what resolution we could use with each lens. We could go beyond 5K with the B Series anamorphics and up to 5K with the Super Speeds, and then we used 8K for the large-format Primo 70 lenses. We could switch the resolution with just a few buttons, and it was quick to change the lens mounts.

Was there a particularly memorable day or moment from any of the shoots that stands out for you?

Moyi: There are two. From Movement, we were on location for a picnic scene, and everything just worked out in that moment. We brought the actors in, and we didn’t really do anything else — we just set up the camera and shot. That was magical, and the scene felt perfect.

For Maintenance, I think the most memorable moment was the second day of shooting. It was supposed to thunderstorm all day, but we somehow made it through the entire day without any rain. Then, once we loaded the trucks, it started pouring. Luck was definitely on our side. 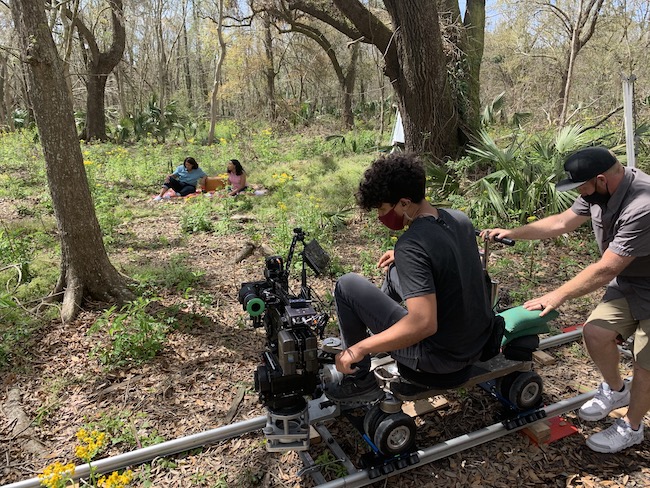