The World War II action drama Greyhound puts the audience on board a U.S. destroyer with its heroic but inexperienced captain and crew as they battle to protect a convoy of merchant vessels from wolf packs of U-Boats in the North Atlantic. It’s a fictional account for which authenticity was the key. Established in the screenplay written by Tom Hanks — who also stars as Navy Commander Ernest Krause — that authenticity was reinforced throughout the production by director Aaron Schneider and cinematographer Shelly Johnson, ASC.

"Our movie is very procedural," Johnson explains. "The dialogue is freighted with technical jargon about rudder commands and nautical vectors, but the real story lies between the lines and is about the impact that these actions have on the crew. So many of the captain's commands are gut calls made in the moment, with life and death consequences. In order to convey the heroism and vulnerability of the characters, we had to give the audience situational awareness and context. We had to teach them this language." 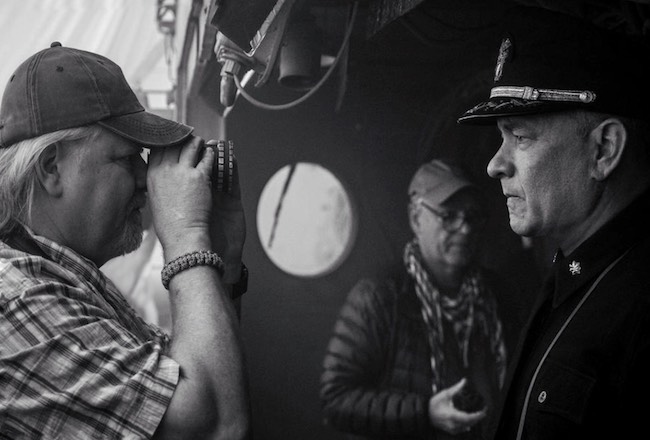 Schneider asked Johnson to research everything he could about the mechanics of naval operation - how to plot an engagement, when threat levels are raised, even how sonar navigation works. "In the heat of shooting the movie, Aaron wanted me to tell him if anything needed clarification," Johnson says. "For example, if Tom's script called for the vessel to maneuver 30 degrees starboard, then it was my job to ensure the procedures carried out on the bridge were represented visually. If I could find a place for the audience to stand within the pilot house [the destroyer's command bridge], I was doing my job."

A replica pilot house was built onstage in Louisiana. The close quarters of the 10'x18' interior set - filled with charts, wheel, compass and other instruments, not to mention a camera operator, focus puller, and cast dressed in period- and climate-appropriate jackets - naturally informed the filmmakers' decisions regarding the movie's visuals. To be able to get close to the characters, and particularly to Krause, from whose perspective the story is told, Schneider was keen to shoot large format. 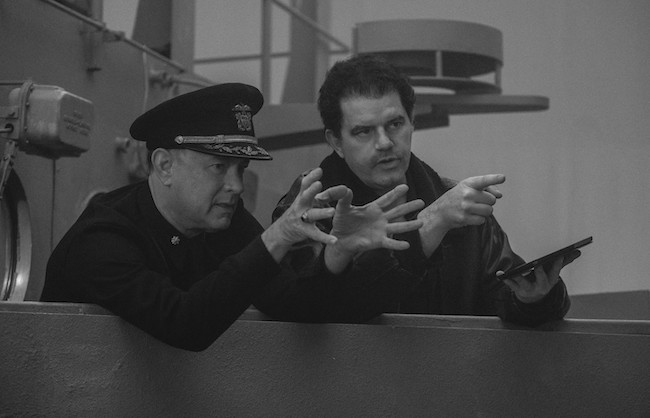 "The larger the format, the longer the focal length that can be used to get the shot you need," explains Schneider, who was a cinematographer before becoming a director and who remains a member of the ASC. By using a longer focal length closer to the actor, he says, "you can actually make a more intimate film on a human level. That was particularly important for our story, which is set in the confines of a World War II pilot house.

“If we were in a corner on Greyhound,” he continues, “instead of a 24mm, we could use a 35 or 40mm and get much the same shot but with a more natural focal length that didn’t feel like we were looking through a peephole on a door. It meant we could get up next to Tom and explore the reactions on his face, which showed the weight of the decisions [Krause] had to make. Greyhound is a character study in that regard, so I wanted to get the audience up close to the actors. Large-format photography translates that proximity into intimacy.”

"We were less interested in showing the detail associated with large-format shooting than we were in how the optics would perform," Johnson says. "An immediate advantage of having the camera in that 2- to 3-foot range [from the actor] is that, with the longer focal length, it adds a textural depth to the set. It's something the audience will respond to almost subliminally."

Knowing that the combination of set and story also called for a handheld approach, "maneuverability certainly played into our camera selection," Johnson reflects. "I knew I wanted the VistaVision-size sensor and ideally to shoot 8K. That led me straight to the [Panavision Millennium] DXL. It's not just a computer with a lens mounted onto it; it's set up like a true production camera. You can take it into the heart of a production with all the modules and inputs that make shooting so much easier. Plus, the full Panavision service and support is always reassuring on any project."

For his lens package, Johnson turned to the Sphero 65 range. "I wanted them because they did everything that an old lens does exceptionally well," he shares. "They had those unique 'imperfections,' distortions and aberrations instead of a sterile separation of sharp colors. When you get to the edge of the face, there's not that cut-out feel. Everything just kind of melds. It feels very analog. We couldn't get them until the last minute because they are in such demand. [Panavision's] David Dodson was digging through every corner of the Earth to pull together a set."

Johnson shot mostly with the 35mm, 40mm and 50mm focal lengths. "There were a few things we shot from afar, as though from a chase boat, where we'd put on a longer focal length," he recalls. "But most of the time we were right there next to the characters, specifically Krause and the faces of the young crew, so it made total sense to have a short depth of field, reasonably close focus, and expressive optics."

Tungsten practicals provided illumination through doorways and portholes of the set, augmented by some warmer interior sources - all of which contrasted with the cool, stormy cyan and gray exteriors. "Since we were going to constantly mix light as the actors moved from inside to outside and as the time of day changed, I expected to use filtration, but it just wasn't necessary," Johnson notes. "I found the DXL color science separated the tones extremely well while the Spheros blended them together in a very unelectronic and beautiful way. The combination of lens and camera really is the look of the movie."

Working close to the actor in a confined space with large-format lenses presented an advanced task for operators Don Devine and George Billinger as well as 1st ACs Michael Charbonnet and Ryosuke Kawanaka. "The job they did was incredible," Johnson says. "In my opinion the 65 format is the most difficult format to pull focus for. Even though the focal length is fairly similar to anamorphic - a 40mm in anamorphic is similar to a 40mm in 65 spherical - the 65 is a lot less forgiving. That's part of using this specialized gear. You rely on your crew so that the creative process on the set remains pure."

Both operating and focus pulling were complicated by the set's placement atop an elevated gimbal that continually rocked to simulate the ship's motion. "Even in a 'static' frame when the actor was 3 feet away and standing still, the focus would have to go from 2 feet to 4 feet," Johnson says. "This was all done largely by feel. The gimbal would be moving one way, the actors another, and the operators were also moving. The assistants were able to watch on a monitor, but they and the monitor were also rocking!

"So much of what we were doing was about freeing the camera so the actors could run from outside, through the pilot house, and out the next door to the deck on the other side," the cinematographer continues. "Being able to pan, turn and follow the actors helps the audience understand the scale of the space the crew are operating in - that running from one side of the ship to the other is just a few steps."

The delivery for Apple TV+ was 4K, but Johnson captured at 8K to take full advantage of the large-format sensor and optics. "It's the edges where all the goodies are," he says. "We didn't want to lose the vignetting or halations in the highlights, which are most active at the edges."

The film takes place over three days and two nights, a period that Hanks' script structures into a sequence of four-hour "watches" signifying the rotation of crew on the bridge. Johnson used these precise times to build what he calls his "manifesto," which provided a blueprint for programming the lighting on set and critical guidance for visual effects. "Aaron wanted most of the film to take place against stormy atmospheric seas and skies, but we wanted to differentiate between the watches," Johnson explains. "Otherwise it would all look the same."

Johnson's manifesto detailed how the light would be impacted by changing conditions such as sky, spray, rain, and the state of the ocean. "As a starting point we took the latitude of the vessel, which was sailing in November, so we knew the sun would rise late and set early," he says. "I asked myself, 'What is the color of dawn, and does that change day to day? How intense is the color of the horizon? What is the contrast ratio between interior and exterior, and how does the sunset transitioning into darkness alter the interior lighting?'"

With this manifesto in hand, the filmmakers were then able to program an LED lighting array that enveloped the set and afforded actors and camera complete freedom of movement. "Each watch could have its own look or looks, so there were maybe 20 looks with which we could program the entire movie," Johnson notes. 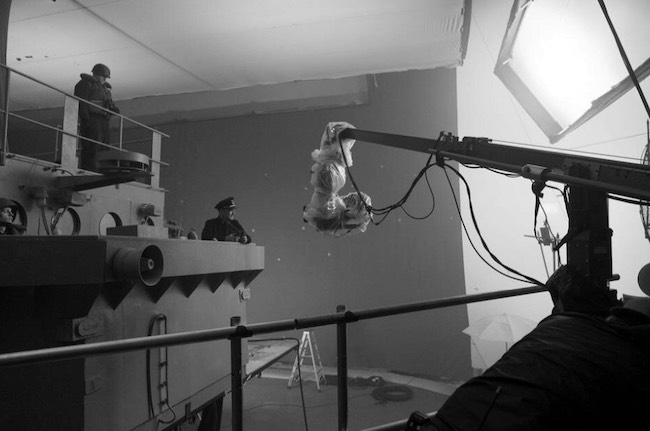 "I wanted to avoid the contamination of green light reflected from greenscreen, so we went with white screen [surrounding the set]," he continues. "It meant that all the light reflections inside the set on the metal details are real. It provided a solid base for the lighting scheme, and the VFX team were able to pull keys very effectively. It really freed us up and let me get light in from any angle I needed, and the skilled electric crew and I could adjust and mix color intensity pretty quickly according to my manifesto."

To further enhance the movie's authenticity, Johnson kept the set's low ceiling in shot and was able to hide small lights among its conduits, ducts and gauges. "There was something about the way the Sphero lenses paired with the DXL camera and with the style of lighting we were creating that defined the world of Greyhound,” he says. 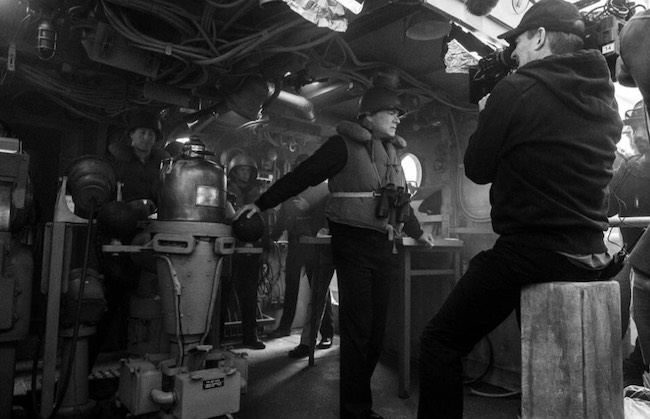 Aside from five days aboard the USS Kidd, a museum ship moored in Baton Rouge, the film was entirely stage-bound - not that you'd know it from the movie's absolute attention to detail. "Every single day on the film, when I was walking on the stage and up the stairs to the gimbal, I would say to myself, 'There's probably 150 DPs who would love to have this job, and I'm the one who's here,'" Johnson reflects. "I'm very thankful to have had this opportunity."