Gaffer Andy Cole talks about his experience working on the Oscar-nominated feature The Favourite and working with Panalux. 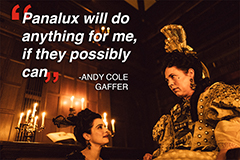 With a long list of beloved major motion pictures and indie films on his CV — including Gladiator and Fish Tank – Andy Cole’s most recent project is now an Academy Awards behemoth with a total of 10 nominations, including Best Cinematography. We wanted to know how it was working on The Favourite, if his perspective on the film has shifted now it’s been so fervently lauded by fans and critics, and how his approach to the job has changed over his career.

After initial pleasantries and graciously accepting a well–deserved congratulations on the many Oscars nominations, Cole describes how, despite not anticipating it during filming, having reached this level of recognition is a pleasant surprise:

Yeah, it's amazing isn't it? We didn't know we were going to get there so it's very, very nice. People have come and said how much they enjoyed watching it and asked me questions about how we did it and it's very nice to have that. People are very interested, and it's really spread worldwide as well - I've had friends from other countries enquiring about how it was [filmed], so yes, it's quite an amazing thing. It feels great, it's amazing.

On the aesthetic of The Favourite, which is defined by wide angles and a natural feel, something not easily achieved by traditional methods:

It is a unique–looking film and the whole concept from the beginning was to make it as realistic as possible.

[For] most of it, we used a lot of candles as lights. I built some candle holders, which reflect off the back which would then push the natural candlelight onto the artists; that was to give it a very natural look. We did use some other lights as well, but not on the day interiors, only on nights - just to make sure we can see something.

The main rooms [on main location day interior], had very big windows. With that wide lens, we did try in the very early stages to put some light in when the light starts to fade at the end of the day, but it wasn't working out because it wasn't as natural. You couldn't make it natural, and then, obviously, we'd see the lights. Yes, we stopped doing that. Then if we did lose the light, we just stopped filming usually. One way to solve that problem.

Running all over Hatfield House with candle lights, trying to catch-up with the camera on a dolly, that was memorable.

Cole and cinematographer Robbie Ryan, BSC, ISC have worked together over the last ten or so years, building a prolific portfolio of films such as Philomena, Slow West, and Fish Tank — a fruitful working relationship which has evolved over the years.

Our relationship and how it's evolved - lovely. We had some long stints together, then Robbie would go away which was great because we'd have a little break. Just like any relationship.

We know each other very well, so he knows that I'll have what he needs ready for him, and I don't have to get surplus stuff in, it's that kind of relationship. We can easily talk to each other so it's quite [nice] that way.

I think we must have done more than ten films by now; [we’ve built a rapport], without a doubt.

Their films together are evidence of a successful working relationship which allows for collaboration from the beginning.

We both start at the very beginning reading the scripts and then have a little chat. I suggest some things and we test [some options]. We did that on The Favourite, not every kind of light would work on that, so we had to work together to get the right feel. 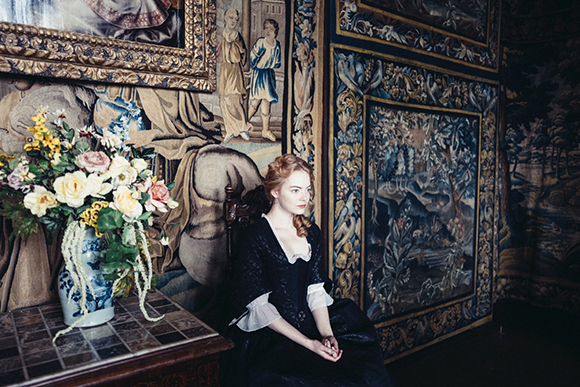 Working with Panalux and the Advantages of New Technology

Another working relationship that has evolved is Cole's with Panalux:

My relationship with Panalux is great. I've known Sinead there almost as long as I've been working; a very long time and I always go there. Panalux would do anything for me, if they possibly can. I phone them up and something will happen, they'll come out with what they can. I have a very trusting relationship with them, they can phone me and say, 'We haven't got that, can we try something else?' and you'll go 'Yes of course. Let's make it work.' I had some big set-ups, they supplied what I needed and it all worked very well.

There's a plethora of choices now with so many different lighting products.

This world we live in now, everything is based around how quickly we can get things done. If you've got an LED light that would change its colour, its colour temperature, and its output at the touch of a button, that saves time. Early days you might have half-hour turn-around on a film set just to do your lighting set-ups, but that doesn't seem to happen anymore, on smaller jobs anyway; it has to be ready. With the LED world we live in now, I think it's amazing. We can really move the day along as quick as we need it to move along.

In the last few years the stuff that's come out is amazing you know. You've got Litemats which you can stick to the ceiling with some gaffer tape, they don't fall down, and that would really save a lot of time and energy and rigging. And then there's more time to shoot, more time for the director and the DOP to get what they need.

Before, in a similar situation, you'd be trying to put up some kind of bar, rig some tungsten lights off it and soften them down, and it all took a very long time. And you're always worried that it's going to fall down as well. It wouldn't be very good if it hit the actor or anyone else!

Things have definitely come a long way. I'm a big fan of LED lights that we can use on set really quickly, rig it really fast, and be able to adjust it from the ground. We've got a lot of control.

On technology affecting style and approach:

I think every film is different if you're working with different DOPs. [Working] with some Korean DOPs [who are] very stylistic, they're really [into] lighting. Then you go to a minimal film; like sometimes with Robbie, we can be quite minimal at times. [It depends on] what matches the job.

I think it's about texture. If you try to do something realistic, you're trying to recreate real-life texture: very soft light, very realistic so it doesn't look lit, and that can be quite hard to achieve. 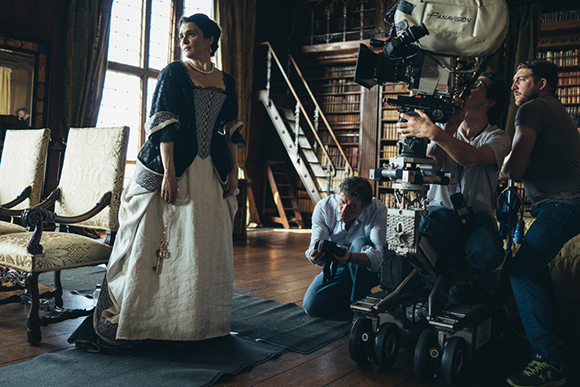 A Career Retrospective: How it began, how films are selected, and some favourite moments.

Cole attributes his success to a combination of learning on the job, the people he's worked with, and opportunity — however, there's no doubt he has the skill.

Well I started working in a yard, loading trucks, and things evolved from there. Then everyone started to go freelance in the mid-'80s. So, I was in that jungle [freelancing] looking for work like everyone else; I had to be my best. There were some slow times around then, so you were only as good as your last job. I've been freelance ever since.

I've been lucky enough to do some quite interesting films, good films, and working with Robbie as well that's happened more than not. Once you start making films you think, 'Oh, I like this', instead of run-of-the-mill blockbusters or anything, you're making smaller, more arty stuff, it really is a better ground.

With a varied filmography — including blockbusters like Mission: Impossible and Gladiator as well as independent films like 28 Days Later and Catch Me Daddy, is there a particular method to selecting a project?

That kind of happened; I didn't pick them as such. For instance, Gladiator was because of the DOP we were working with. Ridley Scott suddenly became very interested in this guy and that's why he brought him and us onto that film. Mission: Impossible happened because I was in the right place at the right time. But yes, that's another lucky thing, not to have done just one genre all the way through or one type of film.

Asked to share a memorable moment from a career that has so far spanned 34 years, Cole offers:

I've never thought about this before, which is quite strange, I suppose. I think a couple of night exteriors that we did on Gladiator were amazing when we were going through the streets of the Rome, and they were very, very big set-ups. I don't know if it's my favourite but it's one that I remember, which is quite impressive that we could have streets and streets of people walking around. Centurions coming through Rome and what not. But it was quite a good set-up.

There must've been many smaller ones that are beautiful somewhere along the line, I'll have to start looking at that.

What’s Next on the Horizon

In the final stages of filming Molly, another Panalux-supported film, Cole shares:

This is my third film with Sally Potter, her husband Christopher, and Robbie, so we are all quite comfortable with each other. We shot in Almeria in December and then New York in January and finished off in London. It's a very interesting film and has a tremendous cast, so let's hope it does well!

I've always been busy enough and that's a good thing, and I'm starting another job, week after I finish this one called Ammonite. It's a story about a fossilist, Mary Anning, set down in Dorset. We're filming on a lot of beaches which I'm looking forward to. It's quite a gentle film, slightly different from what I'm doing at the moment. The script is very lovely, very nice; a gentle love story. I'm looking forward to getting into that.

On managing breaks with such a busy schedule:

That's a strange one. I've got a five-day break between when I finish this and I start the next one, but it's been very constant, yes. Honestly, I had Christmas off which was good!

There seems to be plenty of work to go around. Generally, it's been within a week or so of finishing one [job] that another one's due to kick off.